Last week, as I was checking the culvert area, I noticed the water was cloudy on the outflow side of the culvert.  I also got a whiff of what smelled like sewage.  That's not unusual in muddy areas, but then I noticed that water was not only flowing out of the culvert pipe, it was flowing from under the pipe.  A closer examination seemed to indicate that the source was one the septic lines that run from the pumps, under the trail, and out to the leach fields.

We called Epping Septic and Kellop Construction to come check it out.  A septic line leak in one of the two, 2 inch lines that run under the culvert was confirmed.

Kellop did some tests to determine which pump and which line has the problem, and will be fixing the problem.  According to them, it's a 2 inch line under the culvert.  The line was enclosed in a 6 inch pipe in order to make any future repairs as easy as possible.

On a side note, two weeks ago, we had Epping septic check the holding tanks it the leach fields.  This was the first time these tanks have been tested and the board was concerned about what we might find.  What we found surprised and pleased all of us.  The state of the tanks was perfect.  From the fairly extensive research the board has done about our septic system, we are very impressed with the quality of the work that was done on the leach fields.

Getting back to the leak, while a leak is hardly good news, I wouldn't classify it as bad news, at least not at this point.  According to Epping Septic, the amount of gray water flowing into the pond is not significant and should be no immediate problem.  According to Kellop, who agreed to fix the problem as part of the work they have to do to finish up here, the repair should be a relatively simple one.

At the conservation committee meeting this week, we discussed water testing as a long term practice and as a way to assessing the impact of the leak (if any) on the immediate area.  At the same meeting we discussed protecting about two dozen of the larger trees on the other said of the pond, from the beavers.  On Wed. morning we will walk to identify the trees and begin the water testing.

This is a message I just sent to the conservation committee: 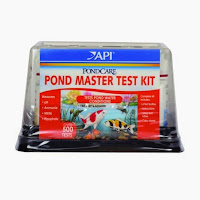 After exchanging the emails with the state volunteer lake testing folks and the some research into pond test kits, I held our first fund raiser (my credit card) and purchased this basic test kit.
http://www.amazon.com/API-Pondcare-Master-Liquid-Test/dp/B0002DJNN0/ref=sr_1_1?s=pet-supplies&ie=UTF8&qid=1432396452&sr=1-1&keywords=pond+test+kit

It should be here by Tuesday and we can do some testing as we take our walk on Wed.  Attached is a spreadsheet for recording results, including a map of relatively easily accessible sites for testing sites.One indicator we will want to examine closely will be the phosphate level.  I expect the septic leak area will have a significantly higher content than other areas.  The levels of phosphate would normally be expected to be the same at sites 3 and 4, but with the leak, it will definitely be higher at 4.  Once the repair is made, it should quickly return to equilibrium.

I think it will be a good idea to test sites 4, 8, and 9 on a daily basis until the leak is fixed. I would expect readings to vary greatly at site for, depending on how soon after a pumping cycle the tests are made.  However, the telling results will be sites 8 or 9.  Any rise in reading at those sites could be an indicator of trouble.  I don't expect any changes in either site, but better safe than sorry.  If there are any changes, the test results will be important in "encouraging" Kellop to make the repair in a timely fashion.

I would also like to run a series of hourly tests at site 4 to see how quickly that area recovers after a pumping cycle.  The key to doing that is being around when a pumping cycle is taking place.  Taking a reading right after the pump stops and hourly thereafter, will be very enlightening.

It will also be interesting to check after a rain, because fertilizer run off will also increase phosphate levels.  It's important to note that individual readings mean little, especially when taken at a time when they would be expected to be higher than normal.  The most important indicator will be long term data collection.