Here's a time lapse video with 30 minutes of gnawing in 30 seconds. Most of the work is done by one beaver, but about half way through, another beaver comes in to get a chew or two. I thought the tree would go down tonight, but clearly they were just interested in grinding down those incisors. 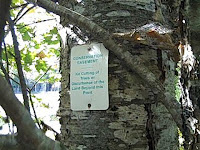