Sherwood Glen Pond had two new residents. Up until tonight, I thought there was just one beaver kit, but I was lucky enough to get about ten minutes of video of TWO.  I have no idea of their sex, but Jill came up with names that are fitting, and unless anyone objects, I would like to introduce you to Sherwood and Glen, the newest residents of Sherwood Glen Pond. 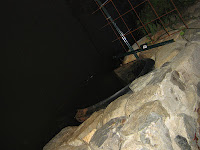 During the first week in May we installed a culvert protection cage around the three culverts running under the pond road.  We expected the beavers to begin building around the cage to stem the substantial flow, but apparently our effort were better than anticipated, because not a single stick was put in place and today the inflow of all three pipes looks like this. The only action they have taken was on the outflow side. Because each pipe is installed a few inches lower than the others, one pipe handles almost all the flow. It is this pipe to which the beavers have turned their attention. 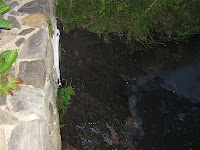 In May and June, the flow was so rapid that as quickly as they attempted to put anything in place, it was washed away. Eventually, the levels in the upper and lower pond equalized and the flow slowed enough so that they could make some headway. What you see here is the sum total of their efforts over the past three months. These flash pictures were taken a few nights ago, about a half hour after sundown. As I stood there on the culvert wall examining the cage area, I was surprised, as I caught sight of movement coming from the first culvert. A baby beaver was coming out of the pipe into the cage. 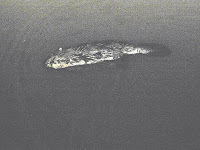 It was too dark to take a picture without a flash, but the baby cooperated by just floating there until I got out the camera and took a flash picture. A split second after the flash, he slapped his tail and dove, but I got the shot.
Posted by Art at 6:08 AM No comments: