A month or two ago, Don and Jessie told me that they spotted some otters on the pond.  Since then there have been a few other sightings.  Today, Jeanne C. sent me some pictures she snapped of one of them tooling around the edge of the pond skating on thin ice.

I just love the profusion of wildlife around the pond, but I have to admit otters are my favorite critters.

Here's one of the snapshots Jeanne sent. 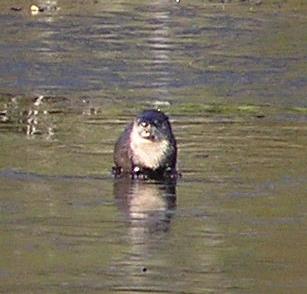 I Missed a Lot of Dam Action!

After the beavers took down the large tree at the head of the trail, the began to pack it in for the season. I, unintentionally, followed suit. My family lives in NJ.  Hurricane Sandy and my parents' 70th anniversary had us occupied.  I haven't been down to the pond for weeks.

Last night, Russ woke me out of my dormancy with an email telling me he noticed the pond level was down almost a foot.  I took a walk to the culvert to investigate.  The drop off was immediately noticeable, but as I surveyed the dam, I saw no active leaks, not even the slow leaks that ran the entire season.  However, there two places that looked like breaches. 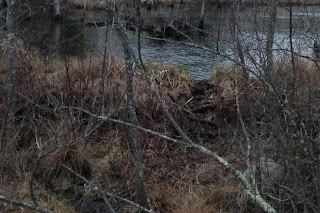 This picture taken at dusk, is what I thought was the smaller of the two apparent breaches. It is on the right as you walk down the trail from the condos toward the culvert.  At first glance, one wonders whether this is just a point where the beavers are crossing, but that's not the case.  There is no evidence of traffic in the gully or coning up the bank on the road side.

Closer inspection during the day revealed that it was a crossover, but it may have also been a small breach. After crossing over, they turned left and walked along the base of the dam to a protected grassy area closer to what I call the Sherwood Glen Turnpike (their chosen crossing). It lies between this crossover and the culvert. Had I taken a picture of it, you could more easily see the difference.  If I remember, I'll do that tomorrow and post it for comparison.

I just found a cool new application for my iPad. It's an interactive whiteboard app that allows you to record presentations. I just used it to give you a peek at the actual breach. Click here to see the breach near the culvert. It is even more obvious, because this is the most used human observation spot, and this only recently appeared.

My best guess is that the pond level rose, because of rain and runoff, and the flow over the top began slowly. The beavers had already settled in and whether by choice or because they didn't notice, they allowed the breaches to continue flowing.  Eventually, the level dropped sufficiently, and the water stopped flowing over the top. The perpetual leaks stopped either because they are now about water level, or the water pressure had dropped sufficiently to stop the leaks or make them imperceptible. 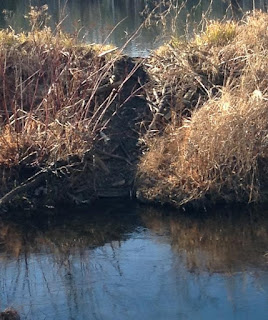 I'd love to hear from any Sherwood residents who might have seen actual water flowing and can confirm, refute, provide more details, offer a possible time frame, or otherwise clarify my musings.

UPDATE: Here's the Sherwood Glen Turnpike.  It's about 20 feet to the left of the breach as you look at the dam.
Posted by Art at 4:20 PM No comments: